A Capanna Margherita in fluency 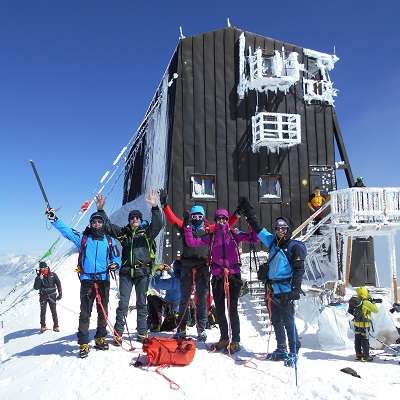 “Franco, are you the one with the yellow jersey beyond the parking lot?”

And so began our adventure on Monte Rosa…

Franco and Michele are two scouts and fathers of the family, but most of all they are two curious. The world of the high mountains fascinates and intrigues them, so much so that they choose to leave their beloved Sibillini Mountains to come and feel the thrill of the thin air at the highest refuge in Europe, the Capanna Margherita!

It is the morning of July 19 and the sun is shining. There is high pressure, but some wind persists at altitude. In Alagna Valsesia it’s a heat to burst! In spite of ourselves, therefore, we wear mountain trousers and boots, we close the backpacks and head (already sweating) towards the Caffè delle Guide, to eat a bite right before they open the plants. At 2 pm we are sitting on the egg that takes us to Pianalunga, from which we can observe from above the beauty of the Walser village with all its scattered villages, covered with flowers.

“Franco, have you already lost your ticket?” – Our hero rubs all his pockets with a thread of breathlessness in front of the turnstile of the Cimalegna plant, until a liberating look reveals the victory: found!

In Indren three beautiful ibexes watch us smear the cream alone, and then follow us with their eyes as we move away towards the Gnifetti hut.

In short we are on the terrace of the hut in slippers, we drink a nice cold beer widely deserved … and I find out that I have two ragby veterans in front of me! … veterans of the ‘third time’… Drink!!

Before dinner we climb up to the shelter to inspect together the path of the next day and we notice the critical issues: the area behind the shelter has several well-masked crevasses, so we should be careful in the dark. Then the glacier starts to be steeper and the present track seems very tiring. We should probably look for an alternative line more to our liking (freeride!).

Also we should leave well dressed given the wind they give on the Rosa the next day … heavy gloves and cap!

We return to the heat of the refuge and in no time we find ourselves sitting at the table to taste the usual delicacies of the kitchen of the refuge. Crazy how they manage to cook well despite the high altitude puts their hand in it: pasta alla carbonara top, roast with potatoes and semifreddo for dessert! Wow!

Quick look at the sunset towards Mont Blanc and then all running to sleep! Wake up tomorrow at 3.45!

In a flash we are all standing. There are those who have slept and those who have not slept much, but the excitement is such that you do not think about it anymore. Now the only thing is to go!

Breakfast worthy of a rugby player, then comes the ritual of boots and harness. The rope and crampons come immediately after, when on the terrace in the cool of the morning we turn on the front piles. The crescent moon indicates the middle of the month but unfortunately does not make enough light to avoid stumbling on the ladder behind the shelter, which in the early morning, cold, is always the most difficult part of the day. 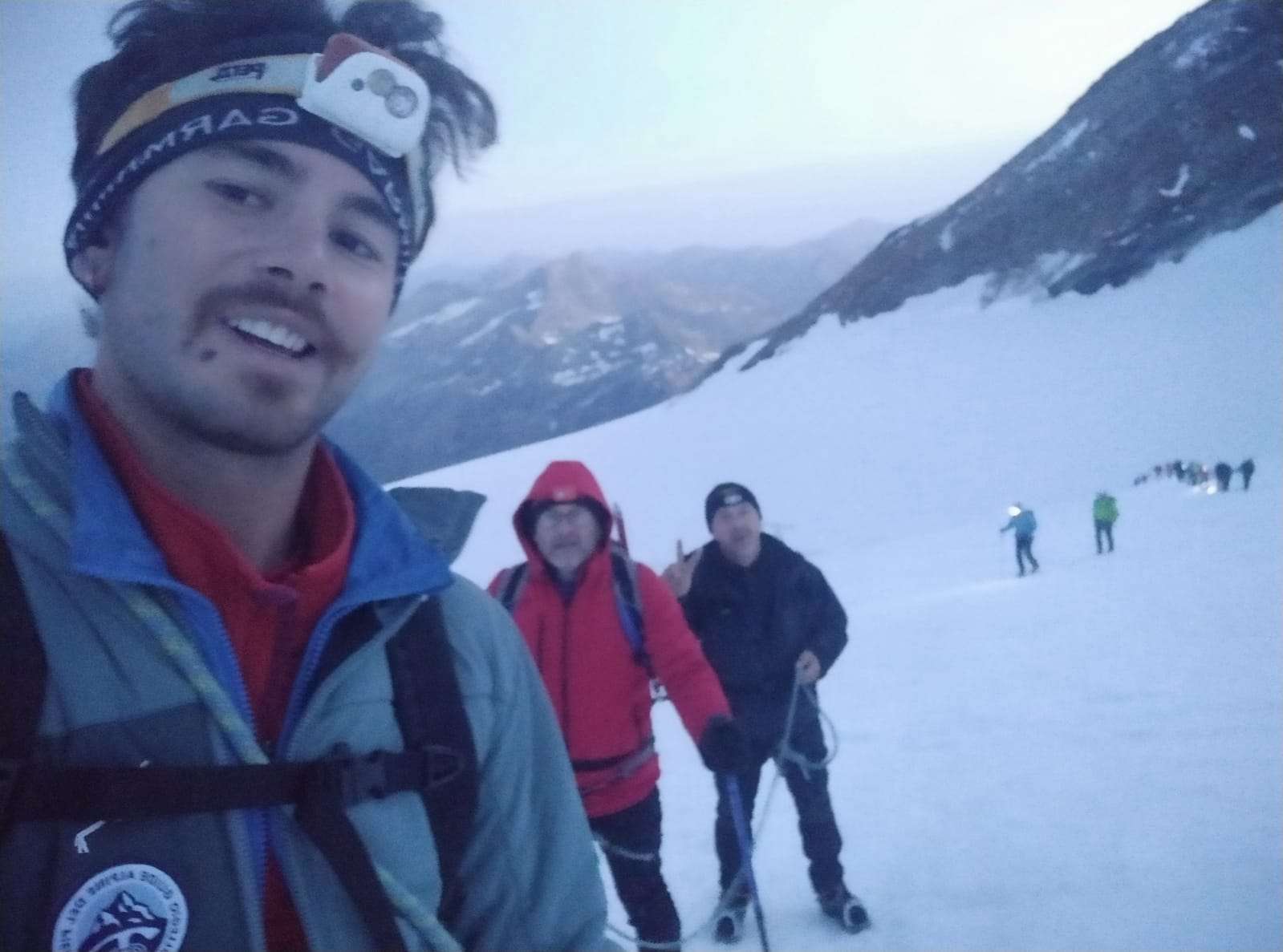 After it an immense expanse of ice opens before us. Beautiful caravans of densely spaced lights, made up of the climbers who precede us, indicate the direction in which to go. It looks a bit like an airstrip for drunken planes… 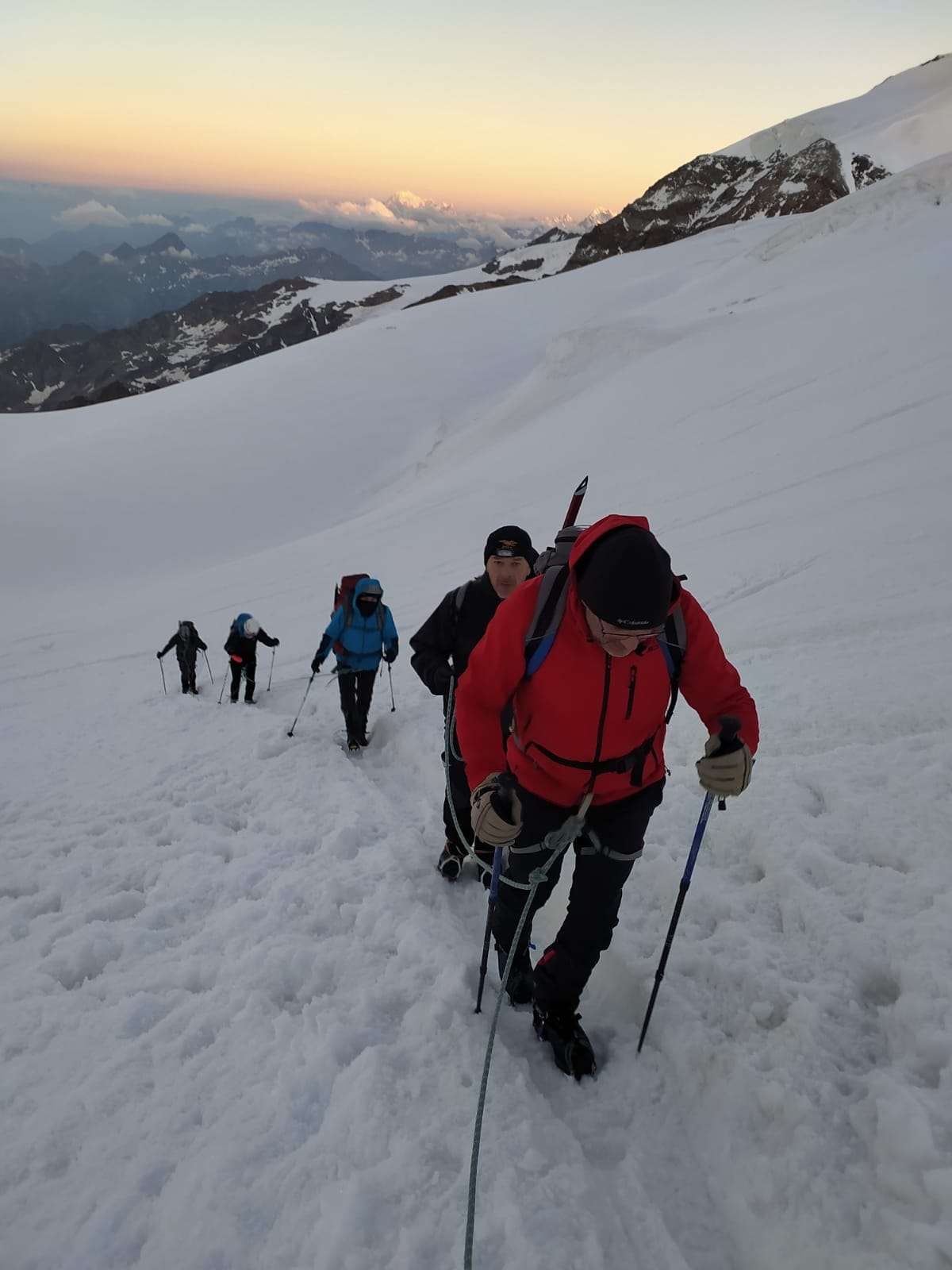 When the sun begins to lighten the sky, behind us opens the atomic panorama of the four thousand Valle d’Aosta: the Gran Paradiso and on the left, almost covered by the Nose of the Lyskamm, his majesty the Mont Blanc. They gradually take color with the passage of time, and with the increase of the sun’s rays. And we too, like our beloved mountains, as soon as we reach the sun at the Colle del Lys, we abandon the pale color of our faces, in favor of a snow-white pink, more alive than ever thanks to the mix sun + panorama top on the north of the Lyskamm and on the east of the Matterhorn, down there.

From the Hill everything becomes simpler apparently: you can see our destination and walk a little downhill, for the pleasure of our legs. If one is tired, from there on it goes by inertia. But that is not the case here! And just over two hours later, here we are in the steep final wall that leads to the top of Punta Gnifetti! 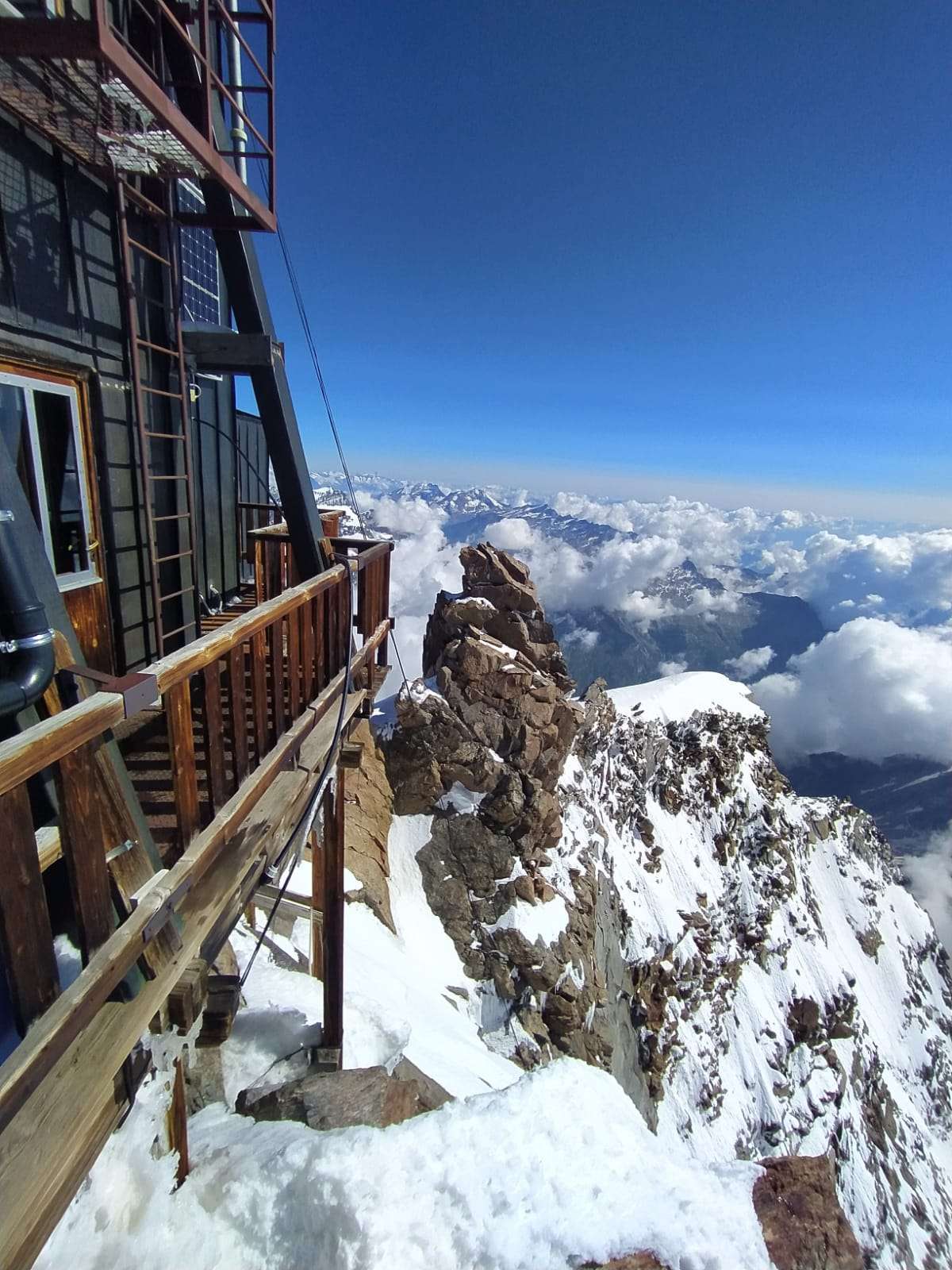 The view from the top is breathtaking, and the emptiness that can be enjoyed from the terrace on the side of Alagna is endless. The black sheet metal wall of the shelter shelters from the wind and gives off the heat accumulated during the now many hours of sunshine passed. From inside comes a pleasant scent of… PIZZA MARGHERTITA!!!!!

We enjoy our summit for an hour and then we walk back to the valley … but not without passing to greet even the top of christ of the peaks!

Just above the hut we meet our roommates, who told us about their 75 four thousand alpine. They only have 9 more to complete the list… and to us now, 80! 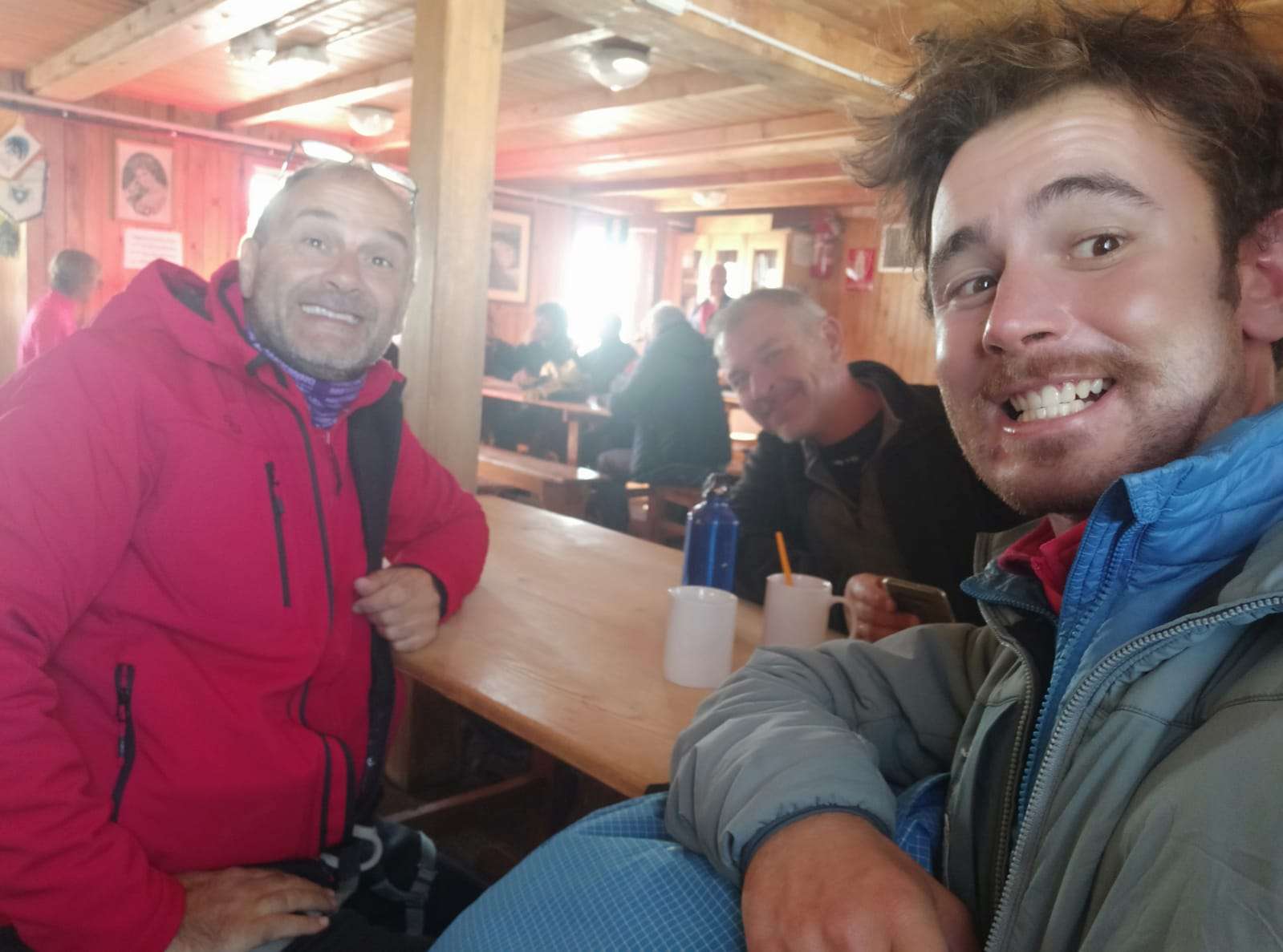